In this post we will discuss digital SLR camera lenses or photographic lenses. Hopefully this article will help you choose some of the best digital SLR camera lenses out there.  These lenses are specifically designed for Single Lens Reflex Cameras or (SLR’s) or (DSLR’s) for Digital. These lenses may be for different sensor sizes such a full-frame camera (equivalent to 35mm film camera) or a crop-sensor camera, where the sensor size is slightly smaller from the 35mm.

History of lens go as far back as 750BC. The first lens known as the Nimrud Lens was unearthed by Austen Henry Layard in 1850. The use of this 3000 old piece of rock crystal is unclear. But it is believed that it may have been used as a fire starter by concentrating light, maybe a magnifying glass, or just a decorative piece.

Ancient Greeks and Romans have mentions of lens in Aristophanes’ (446BC-486BC) play “The Cloud”. The lens is described as a burning glass, a fire-starting magnifying glass made out of water filled glass sphere.

Hasan Ibn al-Haythan also known as Alhazen (965AD – 1040AD) was an Arab mathematician, physicist, and an astronomer. He made significant contribution to theory of optics and visual perception. He is also known as the father of modern optics. He was the first to explain how vision occurs. When light is reflected from an object and enters one’s eyes makes one see that object.

Based on Alhazen’s work, European monks started fascinating reading stones for their aging eyes. The reading stones were made from hemispherical polished glass.

As glass making became more sophisticated (around 1200 – 1300 AD), reading stones were made thinner so they could be worn as spectacles. By the 1400 century, monks were wearing the most sophisticated and trendiest technology of the time.

With time, use of the lens became more important than utility and fashion. Lenses were being utilized in science and research. Lenses gave us the ability to see very far and very near. First telescope for astronomy was built by Dutch spectacle makers and refined by Galileo in 1609.

A few years later, Galileo adjusted a few elements on the telescope and created the world’s first microscope.

From observing distant planets to very near observing biological cells, the lens is truly both literally and metaphorically a fire starter for humanity’s scientific understanding.

What is a D-SLR Lens?

SLR stands for Single Lens Reflex. D – stands for digital camera. Before the invasion of digital cameras, it was just referred to as SLR. Cameras with SLR lenses allow the same image one would see in the view finder to be captured on the camera sensor. SLR cameras use a mirror and prism system to reflect the image to the viewfinder. The mirror is located in front of the senor that swings upward when the camera button is pressed, allowing the light to pass onto the sensor to produce an image. This allows the photographer to capture exactly what he or she sees. As opposed to twin lens reflex, the captured image is significantly different from the image the is seen in the viewfinder. There are many camera companies that manufacture SLR lenses. Nikon, Canon, Sony, Pentax just to name a few. But they all share the same optical properties, Focal Length and Aperture. 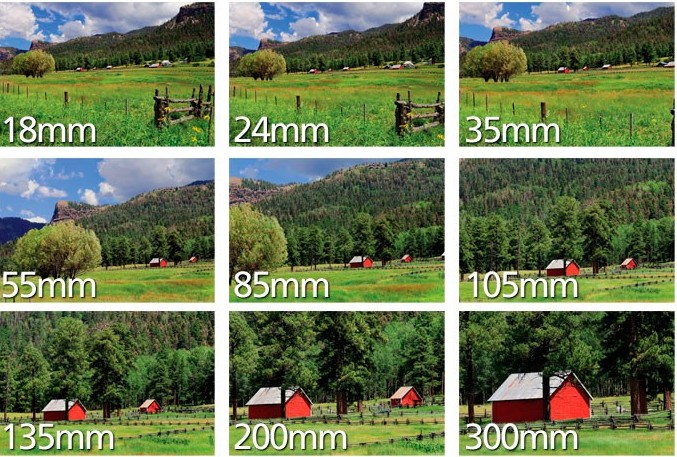 Another type of lens is a Telephoto lens. Telephoto lens is essential a prime lens with large fixed focal length. These lenses are optimized for larger magnifications. Typically, anything above 50mm is considered a telephoto lens. They are commonly used for wild-life or nature photography.

Macro lens is another type of lens used for very near and small objects. Macro lenses are optically engineered to capture detail images of smaller objects such as insects, leaves, water droplets etc.

Aperture controls the amount of light that passes through the lens. An adjustment dial on the lens allows the control of aperture. It is a mechanism that acts as an iris in one eye. Just like the iris, this mechanism is a circular structure responsible for controlling the diameter of the aperture. By controlling the amount of light, the photographer can control the brightness of the image.

Photography is valet of light passing through a lens. It’s an artful combination of focal length and aperture combined with shutter speed and ISO(sensor sensitivity)- more on this later.

Knowing about lenses is very crucial to successful photo shoots. Although with the advent of all sorts of automatic digital cameras, one might be tempted to pick up a point and shoot camera. These cameras do all the work for one. However, SLR photography allows one control every aspect of the scene. Digital camera lenses truly allow photography in its most creative form.